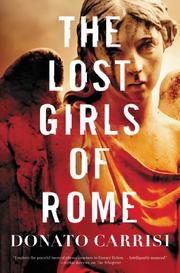 THE LOST GIRLS OF ROME

With references to the Monster of Florence, a medieval serial murderer, and a secret Vatican sect, Carrisi’s (The Whisperer, 2012) second literary thriller draws readers into a labyrinth of evil.

In his derelict Rome villa, Jeremiah Smith lies comatose, "Kill Me" carved in his chest. The emergency responder physician begins working and then sees evidence that Smith is her twin sister’s killer. With that, Carrisi’s noir narrative descends into surrealism, soon drawing in Sandra Vega, police forensic analyst. Sandra’s husband, David, a freelance photojournalist with a penchant for danger, died five months earlier in a fall from a Rome building. Or was David pushed? Perhaps the penitenzieri know? The secret sect, remnants of the 12th-century Paenitentiaria Apostolica—The Tribunal of Souls—keeps “the largest and most up-to-date archive of evil in the world. Evils abound beyond Smith’s murders, and a penitenzieri may be entangled. Sandra stumbles upon Marcus, an amnesiac penitenzieri, and they confront other killings, past and current. Astor Boyash arranges a boy’s assassination to procure a heart for his grandson. Raffeale Altieri kills his father to avenge his mother. Paraplegic Frederico Noni kills his sister because she discovers his deadly perversion; and blind, retired detective Pietro Zinni kills Frederico because Pietro felt pity for Frederico originally. Carrisi writes beautifully—"Obedient little flames that bow their heads in unison at each draught"—and intimately appreciates Rome, its chapels, its narrow alleyways, its fountains and gardens. Confronting human depravity in a story shifting from the current day to the recent past, Carrisi’s second interwoven narrative thread follows a nameless hunter pursuing a transformist, a chameleonlike serial killer able to assume a victim’s personality. The appearance of mysterious Thomas Schalber, Interpol undercover agent, adds complexity, but it’s Marcus and the other penitenzieri, "guards appointed to defend the border" at the "place where the world of light meets the world of darkness," who inhabit the bloody ground where good and evil clash.

SOUL OF THE BORDER
by Matteo Righetto
Mystery

RETURN TO THE DARK VALLEY
by Santiago Gamboa
Fiction

THE PRINCIPLE
by Jérôme Ferrari
Fiction

THE CAROUSEL OF DESIRE
by Eric-Emmanuel Schmitt
Fiction

THE PENALTY AREA
by Alain Gillot

A MAN WITHOUT BREATH
by Philip Kerr
Fiction

A CIRCLE OF WIVES
by Alice LaPlante
Newsletter sign-up