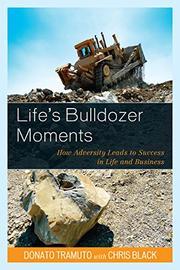 A health care professional recalls a life of entrepreneurial success and the lessons learned from hardship.

Debut author Tramuto was born in 1956 in a small industrial town near Buffalo, New York. From an early age, he weathered extraordinary trials: At the age of 8, he lost most of his hearing in both ears as the result of an infection, an impairment that led to social isolation and academic failure. After a series of experimental surgeries, he recovered much of that hearing only to lose it again years later due to a botched operation. In 1968, the author’s older brother, Gerald, was killed in a car accident, a devastating emotional blow, and another brother, Michael, lost his young wife, Rosemary, during childbirth. Tramuto discusses these anguishes as “bulldozer moments,” calamitous events subsequently transformed into sources of edification and future strength. The author was so moved by his sister-in-law’s death—the consequence of a “routine anesthesia which triggered a violent allergic reaction”—and his own medical tribulations that he started devoting his life to finding innovative ways to more efficiently deliver superior health care. To that end, he’s served in leadership positions at several companies in the health care field and pioneered the development of a digital database that pinpoints complications in drugs undetectable by Food and Drug Administration screenings. The author offers his reflections not only on the nature of business in general, but also on the state of the health care industry in particular as well as broader advice about success in life.

Tramuto’s story is an affecting one, and it’s simply not possible for readers to remain unmoved by his Herculean displays of tenacity in the face of misfortune. The writing is clear and sharp and combines a near confessional candor with rigorous analysis. The author’s experience and expertise in health care are evident on nearly every page. His meticulous, politically unbiased assessment of the industry in the United States is among the highlights of this book, written with Black (co-author: The Money Guy, 2014, etc.). Ultimately, Tramuto recommends a tectonic shift from “a sickness system to a wellness system” that “will not only save the insurers money but will encourage a healthier society,” a position described in impressively nuanced terms. Sometimes the work’s discussion of business slides into the well-worn grooves familiar to the genre—there’s a lot of talk of transformational leadership, “collaborative IQ,” entrepreneurial disruption, and the like. In addition, much of the counsel dispensed is in the form of timeworn tropes about the importance of setting priorities, the educational value of one’s mistakes, and the inarguable significance of a healthy corporate culture. Tramuto’s advice is always eminently sensible but often well-trafficked. Yet the autobiographical narrative is so inspiring the book as a whole simply can’t be reduced to any formulaic type; Tramuto’s life is cinematically heroic. And the explorations of health care policy transcend the normal partisan divisions in public discourse and should be required reading for loyalists on both sides. The thoughtful treatment of the Affordable Care Act alone is worth the price of the book.

A stimulating and moving examination of American health care.

HOW TO SURVIVE WITHIN OUR HEALTHCARE SYSTEM
by Philip A. Scheinberg
Nonfiction