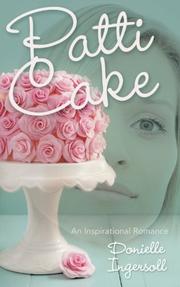 A wistful and talented dessert maven hopes to find the Christian man of her dreams in this debut faith-based romance.

Patti Murray is known as “Patti Cake” for her superb cake-decorating skills as well as her delicious recipes. Her home business, Exquisite Cakes, is steadily growing in Santa Rosa, California. She’s content in her professional life, but her personal life is lagging. She wants to marry and start a family but feels strongly about marrying a similarly devoted Christian. Patti often talks to God about what she wants in a mate, and hopes that he can deliver someone appropriate to “capture the spirit of true, unending love.” When Patti is least expecting it, not one but two contenders materialize. She literally runs into Dr. Cal Ripland, a local dentist, in several ill-fated episodes. He’s a quiet man but she feels drawn to him. While he weathered a loss when his wife died, he still manages to hang onto his faith. Jim Callahan storms onto the scene with his outsized, film star personality to buy a cake for his sister’s wedding, and attempts to impress Patti with the trappings of his fame. He’s passionate and handsome, but she questions whether he really possesses the personal character she desires. She’s torn between the two men until meditating on her personal beliefs, and their faith, makes it clear who is the right match. Ingersoll’s decadent descriptions of Patti’s cake and pie recipes and the inclusion of full recipes in the appendix help their sweetness jump off the page with mouthwatering detail. But the dialogue is often stilted. Jim’s character becomes trite, with an unnecessary kidnapping and gun battle right out of a Hollywood film. The clunky, repeated phrase “the actor Jim from the movies” appears too often. The ending then rushes into an implausible resolution. While the tale should appeal to Christian romance fans, general audiences will likely find the frequent, page-long conversations with God too slow-paced.

While offering scrumptious recipes, this tale of a baker embracing God’s path to true love lacks a convincing plot.