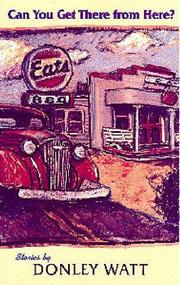 CAN YOU GET THERE FROM HERE?

A debut collection of slice-of-life stories about run-of-the- mill Texans—cruising men with women on the brain, and bosomy women with men on the brain. Originally published in various Southwestern periodicals, the tales take place in a seemingly endless series of bars, pick-up trucks, motels, and trailers. A few of the final stories rise above the norm with wise, lyrical passages, and the voices of Watt's older male narrators have an honest sound. In ``The Man Who Talked to Houses,'' a retired condo salesman contemplating death confides, ``I talk to the houses, yellow skeletons in the night, waiting for tomorrow. I shake my head over shortcuts taken, encourage the slabs to hold, the frames to be patient, remind them of years still to come.'' In ``The Way Things Happen,'' an emotionally burned-out man in his middle years listens to his companion talk about the farm she has inherited, a place she knew as a child, while he thinks, ``I want to...tell her how things end up in certain ways, how things aren't always the way they look, don't stay the way you remember.'' But other pieces don't work on as deep a level, particularly when Watt attempts a female narrator's point of view. His women too often seem to be stereotypes drawn from a male perspective, as when the narrator of ``Ducks'' contemplates her breasts: ``She likes them. Big enough to be full and need good support, but not so big as to be show-offy.'' Here, as elsewhere, the author doesn't extend his imagination far enough to credibly evoke differing states of mind. Ordinary people don't have to be boring—look at Walter Mitty- -but unfortunately Watt's characters are.