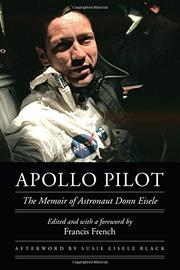 The Memoir of Astronaut Donn Eisele

A posthumous memoir gives an unsung astronaut his due.

In the annals of manned space flight, Donn Eisele (1930-1987) would seem to be the forgotten man, his name not as recognizable as that of crewmates Wally Schirra and Walt Cunningham, let alone John Glenn and Neil Armstrong. Yet the author was a member of Apollo 7, the first manned mission in the Apollo program following the tragic launch that had killed their predecessors. Well after his death, his widow shared some artifacts that included various drafts of a memoir, mainly focusing on his formative experiences in becoming an astronaut and his vivid impressions of the historic mission. Yet the book also suggests his bitterness at being marginalized in the aftermath of the mission and the tensions between the astronauts and those on the ground, particularly those more concerned with the public image of the space program than with safety. He calls the launch-pad fire that took the lives of the three original Apollo astronauts “so preventable, so unnecessary—almost criminal.” He presents Schirra as something of a prima donna, but all three crewmembers shared some suspicion and disdain toward those they felt were more concerned with timetables, budgets, and public image than with sharing responsibility with the astronauts who had more actual experience. Eisele writes of the need to keep the astronauts’ constant philandering secret and of the willing young women who were passed from one astronaut to the next. As the first astronaut to divorce, shortly after returning from space, he soon realized that he had no future with NASA. He was “very bitter about his treatment,” according to his second wife, who says that not a single friend from the tightly knit astronaut community attended their wedding. Because astronauts aren’t necessarily writers, even those with extraordinary experiences have trouble rendering them as more than, “I’m free! I’m floating! What a feeling!” But now those feelings are attached to a name barely mentioned in historical accounts.

A slim, straightforward addition to the record of space travel.