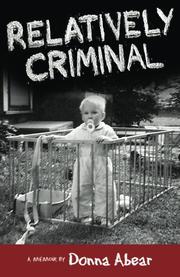 Abear’s (Mom…You’re Not Naked, Are You?, 2000) memoir tells the story of her close-knit relationship with her brother, a lifelong criminal and addict, and her attempts to care for him.
In 1983, the author had just gotten out of a dead-end marriage when her younger brother, Frank, contacted her from prison. Although she hadn’t talked with him for years, she agreed to let him live with her and her two young sons once he was paroled. They both grew up in a household with an aloof, self-absorbed mother and a predatory stepfather, and they now began to depend increasingly upon each other for emotional support. However, she soon realized that despite their bond and Frank’s childlike, gregarious good nature, she couldn’t do anything to turn him away from a life of drugs and theft. She continued to support him, appearing for his court dates, pleading with public defenders and visiting him in prison as his life spiraled further out of control. Abear remarried, and her life began to flourish, while Frank continued to steal to finance his dependence on hard drugs—despite a nearly fatal staph infection and an eventual HIV diagnosis. Abear perfectly captures the 1980s zeitgeist, and her often dark humor hits the mark, as when she tells the story of when her brother, mistakenly released from jail, stole a car and broke into a condom machine before police picked him up. (The author quips that she was “sure the drunken dating population in the area was happy to see the local rubber supply return to normal.”) Although she never seeks to excuse her brother’s lifestyle, Abear shows how he was repeatedly denied access to drug-treatment programs, drawing attention to a system that’s more invested in punishment than rehabilitation.
A hilarious, heartbreaking and poignant story of family ties that bind, against all odds.