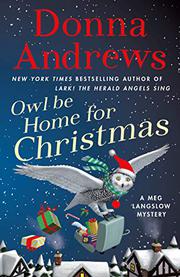 OWL BE HOME FOR CHRISTMAS

A freak storm buries Caerphilly, Virginia, in snow, knocking out all lines of transportation and communication, just in time for the holidays and the annual Owl Fest convention.

Meg Langslow (Terns of Endearment, 2019, etc.) has agreed to help her grandfather Dr. J. Montgomery Blake with the logistics for this year’s conference. The highlight, or lowlight, is a fierce battle between members of SPOOR, Stop Poisoning Our Owls and Raptors, who want to save the spotted owls threatened with extinction, and the champions of the barred owls who are muscling in on their turf. The leading partisan of the latter camp, Dr. Oliver Frogmore of Oregon’s Buckthorn College, is whiny, selfish, and racist, and it’s an unmitigated pleasure to watch him drop dead in the middle of a particularly self-serving public speech. Despite the awkwardly continued adulation of his lackey, Dr. Edward Czerny, Frogmore’s death spotlights a wide range of old grievances against him, from African American graduate student volunteer Melissa McKendick’s tale of her rejection to Buckthorn’s program to Dr. Vera Craine’s story of the hostility that drove her from Buckthorn to lowly Cornell. But nosing around for clues to the manner and author of Frogmore’s death has to compete for Meg’s time and energy with such mundane but suddenly urgent questions as what unflappable Caerphilly Inn manager Ekaterina Vorobyaninova should serve the snowbound guests for Christmas, Hanukkah, and Pancha Ganapati. The laughs come more slowly than usual, especially after hateful Frogmore’s death, but the payoff is the climactic revelation of an unusually clever and deep-laid motive for this best of all possible murders.

One of Andrews’ most successful balancing acts between creating a brand-new whodunit and showcasing her zany regulars.