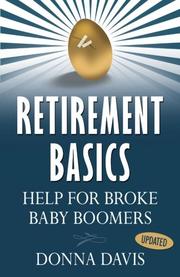 An engagingly written but thin overview of retirement basics.

Debut author Davis, a former New York City chiropractor, wrote this book after doing research for her own retirement. Intending it to be “help for broke baby boomers,” Davis does indeed cover all the basics: Social Security, Medicare, Supplemental Security Income, retirement plans, wills, living wills, health, working during retirement, saving money, and where to relocate. Davis writes in a folksy, informal style, sharing her own story and adding some personality to otherwise fairly standard text. The chapters are short, offering a cursory glance at each topic without the depth of detail found in other retirement books; instead, the author provides numerous links to additional material. Much of the book’s content is, in fact, compiled from other sources, but for those readers who don’t wish to hunt around, Davis’ work is likely to be a time-saver. Still, readers should be aware that this guide just scratches the surface. The 11-page chapter titled “Retirement Plans,” for example, is nothing more than definitions of and a few facts about 401(k)s, pensions, IRAs and Roth IRAs. The discussion of wills, inheritance and living wills, a mere five pages, feels incomplete. The chapters about healthy eating and exercise seem to convey the author’s personal view of food and her own experience with physical activity rather than authoritative, objective facts. One of the more compelling chapters, “Living Abroad,” should be valuable to retirees who may be considering an international relocation. Here, the author shares useful details about visa and financial requirements. She also provides a helpful rundown of many of the more popular international retirement spots, such as Panama, Ecuador, Mexico, Belize, Nicaragua and Thailand (though one can’t help wondering why Costa Rica was excluded). A nice touch: Davis includes relevant lines from songs popular with boomers, like “Don’t Stop” by Fleetwood Mac and “Let’s Live for Today” by The Grass Roots.

Accessible yet abbreviated; will appeal largely to boomers who want a broad-brush approach to the major elements of retirement.