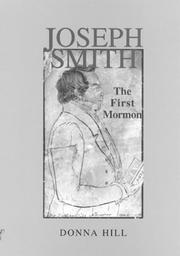 This discursive biography is intended to show that Joseph Smith (1805-1844) and his Church of Latterday Saints were well within the mainstream of American history; yet, since the author is a sophisticated historian as well as a Mormon, the book provides evidence for skeptical views as well. Smith's family, Hill shows, were upstanding New England craftsmen and farmers, but he, his parents, and most of the original Saints came from a bitter, marginal background, their alienation from existing churches partly reflecting their social status. Smith himself discovered the ""plates"" purporting to contain the Book of Mormon at a time when ""treasure-digging"" was the rage in northern New York, and subsequent hassles about their translation and publication are rendered with the implication that Joseph, however magnetic, may have been serf-hypnotized if not a conscious fraud. The grounds for ""Gentile"" suspicion of the Mormons are also elaborated--they sought a return to the ""primitive, authoritarian church,"" challenging Constitutional principles; in 1842 Smith seems to have had himself ""crowned"" as progenitor of a world empire, and the paramilitary force he built after the Mormons' midwestern migrations made the aim uncomfortably concrete. However, Hill also stresses the Mormons' very American industriousness (their Nauvoo, Illinois settlement was the showpiece of antebellum Illinois) and Smith's personal, if perhaps ""opportunistic,"" antagonism to slavery. As for polygamy, Smith practiced it before he revealed the principle to the faithful, and refused to publicize it as doctrine at all; most Mormons never accepted it, and many (including his first wife) fought it fiercely. The record of Mormon suffering from persecution, amply recorded elsewhere, is also included; what is special about this book is its balanced character alongside either pro or con biographies. Though hedged by Hill's own allegiance, it does for Smith what Samuel Taylor's The Kingdom or Nothing (1976) did for one of his less complicated followers--puts the subject in a full, fresh context.