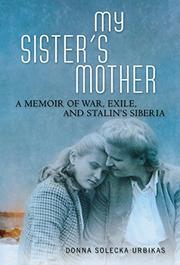 A Memoir of War, Exile, and Stalin's Siberia

In this heart-wrenching debut memoir, a mother and child survive Stalin’s work camp then struggle to find inner calm in America.

As a child growing up in 1950s Chicago, Urbikas longed for a “normal” mom. Instead, her Polish-born mother, Janina, often told gruesome war stories and talked to herself in the mirror. But as Urbikas matured and suffered her own hardships, she began to understand her mother’s need to recount her past. On the extremely cold morning of Feb. 10, 1940, Communist soldiers pounded on Janina’s farmhouse door near Grodno, Poland, and informed her—a young, single mother—that she was sentenced to 10 years of hard labor. She and 5-year-old daughter Mira were stuffed into lice-ridden train cars and taken to a remote logging camp in the Siberian wilderness. Fed little and plagued by vermin, disease, and blistering cold, Janina lugged a heavy ax 4 miles to and from work every day, where she chopped thick branches off trees. Meanwhile, poor little Mira was left by herself to wait in agonizing bread lines, often unsuccessfully. After years of torture, Janina and Mira—helped by a Polish army officer who eventually married Janina—escaped to England and then America. Urbikas’ flashbacks are seamless as she alternates chapters between her mother’s and sister’s stories—written in third person—versus her own first-person account. With many vivid sensory details—like “the grainy taste of…coarse rye bread”—the author’s lyrical prose instantly transports readers to the labor camp. This gripping page-turner is also filled with stark contrasts. For example, in the camp, Mira and Janina sleep together on a dirty, bedbug-infested cot, and when Janina feels a rat scrabble across her chest, she can barely lift her tired arm to heave it onto the floor. In contrast, one of Urbikas’ biggest worries is making the majorettes team in her American high school. A realistic depiction of the effects of evil, Janina’s and Mira’s experiences are sometimes overwhelming. In one scene, a tiny girl drowns and nobody helps.

A painfully beautiful portrayal of an indomitable, loving mother’s survival.