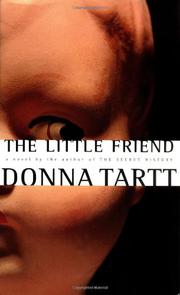 The successor to Tartt’s wildly successful debut (The Secret History, 1992) is another ambitious dark-hued melodrama—destined for big sales, though it’s an intermittently creaky performance.

The burden of sorrow that afflicts the family of a murdered child, an introspective preadolescent turned avenger and detective, and a clan of redneck malcontents who make Faulkner’s Snopeses look like the Sitwells are among the lurid materials tossed amiably together in this very long, very overheated, yet absorbing novel. It begins magnificently, with a tense prologue that describes the discovery of nine-year-old Robin Dufresnes’s hanged body on a hot Mother’s Day afternoon in a small Mississippi town. The story then leaps ahead 12 years, to show us Robin’s mother Charlotte still paralyzed by grief, his sister Allison (unable to remember what she alone presumably witnessed) sleeping 16 hours a day, and her younger sister Harriet—bookish and virtually friendless—persuaded that she knows who killed her brother (the murder was never solved), and how to punish him. Tartt whips up a townful of vivid eccentrics (prominent among them are the Dufresnes girls’ four unmarried great-aunts, from whom Harriet solicits details about their family’s hushed-up history), creating a rich backdrop against which Harriet and her partner in intrigue, an ingenuous boy named Hely Hull (who adores her), evade embarrassments like church camp and parental discipline, eavesdrop on a passel of sinister snake-handlers (thereby discovering the perfect instrument of revenge), and pit themselves against the local white-trash Ratliff brothers, led by murderous psychopath Farish, who conceals the amphetamines he produces in a remote water tower. Despite an overload of staggered false climaxes, it’s all quite irrationally entertaining. Direct allusions and glancing references alike make clear that The Little Friend is Tartt’s homage to the romantic adventure novels of Twain and Stevenson—and, for much of its length, a rather bald-faced imitation of To Kill a Mockingbird.

Still, the characters are gritty and appealing, and the story holds you throughout. Tartt appears to have struck gold once again.