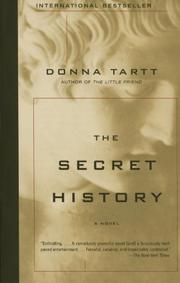 The Brat Pack meets The Bacchae in this precious, way-too-long, and utterly unsuspenseful town-and-gown murder tale. A bunch of ever-so-mandarin college kids in a small Vermont school are the eager epigones of an aloof classics professor, and in their exclusivity and snobbishness and eagerness to please their teacher, they are moved to try to enact Dionysian frenzies in the woods. During the only one that actually comes off, a local farmer happens upon them—and they kill him. But the death isn't ruled a murder—and might never have been if one of the gang—a cadging sybarite named Bunny Corcoran—hadn't shown signs of cracking under the secret's weight. And so he too is dispatched. The narrator, a blank-slate Californian named Richard Pepen chronicles the coverup. But if you're thinking remorse-drama, conscience masque, or even semi-trashy who'll-break-first? page-turner, forget it: This is a straight gee-whiz, first-to-have-ever-noticed college novel—"Hampden College, as a body, was always strangely prone to hysteria. Whether from isolation, malice, or simple boredom, people there were far more credulous and excitable than educated people are generally thought to be, and this hermetic, overheated atmosphere made it a thriving black petri dish of melodrama and distortion." First-novelist Tartt goes muzzy when she has to describe human confrontations (the murder, or sex, or even the ping-ponging of fear), and is much more comfortable in transcribing aimless dorm-room paranoia or the TV shows that the malefactors anesthetize themselves with as fate ticks down. By telegraphing the murders, Tartt wants us to be continually horrified at these kids—while inviting us to semi-enjoy their manneristic fetishes and refined tastes. This ersatz-Fitzgerald mix of moralizing and mirror-looking (Jay McInerney shook and poured the shaker first) is very 80's—and in Tartt's strenuous version already seems dated, formulaic. Les Nerds du Mal—and about as deep (if not nearly as involving) as a TV movie.