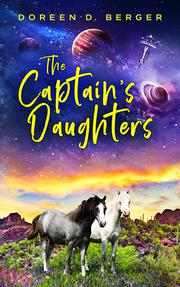 A space captain’s daughters are kidnapped in this debut middle-grade SF novel.

Twelve-year-old sisters Diane and Robin were born eight months apart to Daniel and Beth Marsh, but their parents died in an interplanetary war when they were babies. Daniel’s brother, Capt. William Marsh, adopted the sisters. While they were first raised by his parents on their ranch in Santa Fe, New Mexico, they’ve been living with William on his spaceships since they were 5 years old. He often needs to rein in their mischief and impose discipline when they stubbornly insist on not following rules, but he does so with love. In March 2297, the tweens are exploring an area around their grandparents’ ranch when a transporter beam suddenly whisks them away. They find themselves imprisoned on an alien vessel by Cmdr. Blassen, whose people—the Mog—were conquered by the warmongering Frazon, enemies of the League of Universal Planets, to which Earth belongs. Having discovered a portal between parallel universes, Blassen has concocted a villainous scheme to kidnap children in one and sell them in the other. Usually he nabs infants, but he’s taken the sisters to fulfill a special order from the Frazon imperial governor, Gen. Malon, who seeks revenge against William; the captain led the battle that killed his son. Blassen has a double cross in mind that will allow him to keep Malon’s stealth-technology bounty while selling Diane and Robin and pocketing the money. Although the resourceful sisters manage to escape to an LUP space station and then the Marsh ranch, their troubles are just beginning. They never existed in this universe, and no one knows them, including this world’s William. Reuniting the family will present multiple challenges—and Blassen still has a few tricks up his sleeve.

Berger sets her book in a Star Trek–like world, with technology such as phasers, transporter beams, starbases, equivalents for the holodeck and the turbolift, and so on, giving the cosmos a familiar feeling. The heart of the story, though, lies less in SF elements than in family relations. Vignettes from the past show William and his adopted daughters navigating the girls’ frequent testing of his limits, which he meets with fatherly justice. The abduction allows the parallel universe’s childless William to learn what he’s lost by not having kids to teach him patience and open him up emotionally. But the mischief/discipline scenario becomes repetitive, and despite the sisters’ hijinks, the novel provides little to characterize the girls except that Diane likes to read and Robin’s hobby is geology. At times, the style feels unnaturally slick, as in “Some even paused to watch the merry scene,” or generic: “The girls enjoyed living in space and they loved being with their father.” Similarly, overused dialogue tags (“teased with a grin”; “asked pleadingly”) slow down the pace and give an artificial tinge to the writing, analogous to adding a laugh track. They tell rather than show.