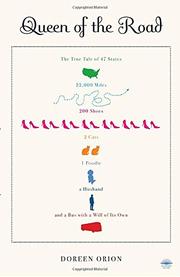 QUEEN OF THE ROAD

How to get away from it all while taking it all with you.

A self-described Jewish princess from Long Island, Orion (Psychiatry/Univ. of Colorado; I Know You really Love Me: A Psychiatrist’s Account of Stalking and Obsessive Love, 1997) grudgingly accompanied her gung-ho husband on a yearlong trek around the country in a converted bus, despite her addiction to designer couture and general disinterest in leaving the house. A series of minor setbacks ensued (malfunctioning door, difficulties parking, etc.), but the journey passed pleasantly enough, as the author learned to prioritize relationships and experiences over material things and engage with the world beyond her television set. Mildly amusing situations and observations abound; Orion is relentlessly quippy, making the book resemble a low-impact remake of the screwball road-trip comedy The Long, Long Trailer with Rita Rudner playing the Lucille Ball role. It’s difficult, however, to sustain interest in the author’s many anecdotes concerning the cute antics of her pets or her beloved husband’s zeal for DIY projects. The material is simply too mundane, and while Orion tries gamely, her employment of goofy puns, warmed-over self-deprecatory shtick and Erma Bombeckian wry homilies fails to transform the proceedings into comic gold. Her spiritual epiphanies likewise grate: Grand renunciation of material pleasures is a bit much coming from someone who can afford to take a year off work and seek out “authentic” experiences from the comforts of a diesel-guzzling luxury recreational vehicle. The book is also unsatisfying as a travelogue, since Orion’s interest remains stubbornly focused on her cozy domestic concerns. The surprising paucity of reportage on local color and customs or the variations in landscape, architecture and cuisine contributes to an overriding atmosphere of twee self-congratulation as the author announces her newfound willingness to hike a mountain path or cut back on her television consumption.

Charming enough in small doses, but ultimately irritating and inconsequential.