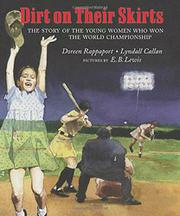 DIRT ON THEIR SKIRTS

During WWII, as men went overseas, women assumed many of their jobs; Rappaport and Callan enthusiastically invent a fictional witness to that historical moment when baseball, too, was taken over by women. Two teams from the All-American Girls Professional Baseball League, the Rockford Peaches and the Racine Belles, are vying for the 1946 championship. It’s the bottom of the 14th and the score is 0-0. In the stands, Margaret’s father, having just returned from fighting overseas, has joined his family for this final game of the season. As the last inning unfolds, Margaret, shouting and cheering, can hardly wait until she’s old enough to join this group of talented women. While the Belles joyously celebrate their victory on the field, Margaret proudly recalls her mother’s words, “You do have to be tough to play baseball in a skirt.” The text benefits from Lewis’s full-page watercolors, which range from the antic and expressive to exquisitely solemn with tension. Curiously missing from the historical notes is any reference to the popular film, A League of Their Own, which first revived interest in the league. That doesn’t detract from a book that reminds readers not to restrict their dreams on the basis of gender. (Picture book. 4-8)