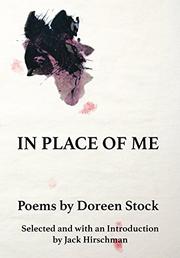 IN PLACE OF ME

Poems Selected and With an Introduction by Jack Hirschman

A rousing retrospective of the more recent work of a prolific poet, by turns wide-ranging and piercing.

Ezra Pound taught readers most succinctly about the power of juxtaposition in his famous—and famously brief—1913 poem “In a Station of the Metro”: “The apparition of these faces in the crowd; / Petals on a wet, black bough.” By bringing together two unlikely images, Pound opened up new meanings in both, and the relationship that links them remains tantalizingly mysterious. Such juxtaposition is one of the tools that Stock (Just Like in the Song of Songs, 2009, etc.) ably wields in her new volume of selected verse, culled from just one decade of her work as a publishing poet. In “While the Men Prayed,” for example, Stock sets people at prayer next to a “large sabra cactus” with “yellow blossoms / which grew red and exploded / before my very eyes.” In “Torture,” tiny jellyfish are compared with egg yolks “before / being broken into by the tine / of a fork.” Most startlingly, in “Cho,” the narrator describes the moment that a charging deer collides with her automobile and then deftly shifts to reflections on the man who killed dozens at Virginia Tech. This collection is thus a kaleidoscope of surprising images, arrayed in a pattern whose logic, while alluring, is sometimes elusive. The volume pulls from more than a dozen different books, but unlike similar collections by others, it’s organized in reverse chronological order, so that readers see Stock’s more recent work first, starting from 2008. (The final section, however, from 2009, is an exception to this rule.) This idiosyncratic arrangement is an excellent decision, for it turns the reading experience into a process of excavation and lets Stock’s mature work serve as a heuristic for earlier offerings. Throughout, she deals with heavy themes—death, war, religion—and yet never lets them become ponderous, instead situating them in the real lives of real people. For instance, she reflects on the murders of five homeless men while her “laundry is in the machines down the street.” Of course, the poet subtly reminds readers that laundry and murder exist in the same world—our world.

A forceful argument for Stock’s growing relevance as a West Coast poet.