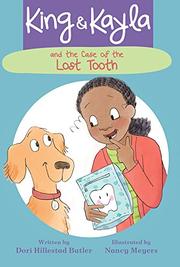 KING & KAYLA AND THE CASE OF THE LOST TOOTH

From the King & Kayla series

King and Kayla, the detective duo, are back to solve the mystery of Kayla’s missing tooth.

King, the happy and hilarious golden retriever narrator, anxiously awaits the return of his human, Kayla, who’s been at school for “eleventy seven hours. Maybe even eleventy seven days.” When Kayla finally arrives home, she has big news: She’s lost a tooth! Kayla is excited to use her class’s tooth-fairy pillow that night, but, alas, her tooth is missing! Though King discovers the pillow smells like turkey sandwiches (his favorite food), just like Kayla’s teeth, her tooth is nowhere to be found. The pair checks the car, the last place Kayla saw the tooth, and King finds lots of crumbs (more of his favorite foods) but no tooth. And so it goes, and Kayla must go to bed with an empty pillow. In the morning, Kayla finds a dollar, a dog treat, and a note from the tooth fairy even though her tooth wasn’t there. But when King notices the pillow still smells like turkey sandwiches, he’s found the final clue. Each page includes illustrations that are often humorous and highlight the affection between King and Kayla, who is depicted with brown skin and Afro-textured hair.