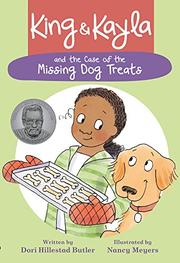 KING & KAYLA AND THE CASE OF THE MISSING DOG TREATS

From the King & Kayla series, volume 1

In a brand-new series a girl and a dog are detectives, finding mysteries in everyday events.

King is a dog (a golden retriever), and Kayla is his human (a brown-skinned gal with springy brown hair). Through King’s narration, readers get a glimpse of a dog’s innermost thoughts—which mostly revolve around food and not going outside (a common mistake made by humans). Kayla’s inability to understand King’s dialogue, rendered in perfect English both within the text and in thought bubbles, is a running joke in the series. In their first book, Kayla prepares King’s favorite snack, peanut-butter treats. But alas, they are not for him! They are for her friend’s new puppy, Thor. When some of the treats go missing, King seems to be the prime suspect. But his nose has picked up the scent of an intruder. How can he convey this to Kayla? In true detective fashion, Kayla makes a list of known and unknown facts. In the second book, published simultaneously, King & Kayla and the Case of the Secret Code (2017), Kayla again employs this strategy to solve the crime. Readers will connect with this charmingly misunderstood pup (along with his exasperated howls, excited tail wagging, and sheepish grins).

The author of The Buddy Files whips up a light mystery fare for the younger set.