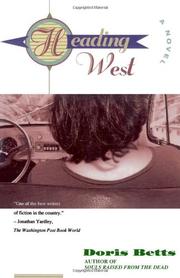 Nancy Finch is 34, an unmarried North Carolina librarian; and when she grudgingly goes off on a camping vacation to the Smokies with her sister and brother-in-law, Dwight Anderson enters her life. But this isn't romance. Dwight, you see, is a desperado, an armed robber, and Nancy becomes his kidnappee; off across Tennessee they drive, having picked up quite by accident yet another hostage, a crooked and disgraced ex-judge named Jolley. Through Arkansas and Texas, the three, though all frightened, soon enough turn oddly comfortable with one another--allowing the surprisingly (unconvincingly) tame Nancy to give up any number of golden opportunities to flee, cry out for help, inform someone of her and the judge's plight. And when she does finally attempt to get help--meeting a doctor who's camping with his hyperactive young son at a campground--something pusillanimous in Nancy's attitude (her fear is real, but maybe her taste for adventure-at-last is realer) causes the man to not take her seriously: he makes a pass instead. Eventually Nancy does escape, however--in Arizona, near the Grand Canyon--and she's taken in by a dog-breeding guardian angel named Chan Thatcher, who spirits Nancy away with her. Then Nancy's apotheosis occurs: hiking in the Canyon alone, followed by the now-crazed Dwight (who has tracked her down), she will ultimately emerge to a new life and a new love with Chart's adult, divorced son. Betts (The River to Pickle Beach) writes vivid and secure prose, endows Nancy with a fine sarcastic intelligence, and shows an acute feel for character delineation throughout. Unfortunately, however, the abduction device (so much better used in Anne Tyler's Earthly Possessions) of the first half is linked by bare threads to the freedom-finding of the second half. And Nancy's journey feels steadily more trivial, pre-ordained, and faintly tricksome--with each narrative premise completely discarded once it has served its purpose. A richly stylish and crafty novel, then, but also a cold and substantially implausible one.