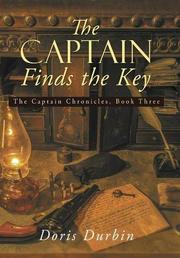 THE CAPTAIN FINDS THE KEY

From the Captain Chronicles series, volume 3

In this conclusion of her trilogy, Durbin (The Captain Seeks the Lost, 2015, etc.) presents the further adventures of Civil War veteran Capt. Harry Richardson, who was captured at Missionary Ridge and spent time as a prisoner of war. He later joined the U.S. Cavalry to fight Native Americans and received a theology degree so that he could embrace the peaceful life of a Georgia preacher in the town of Choestoe. Along the way, he fell in love with and married a strong-spirited woman named Sarah and started a family. But the central conceit of the author’s stories is that violence continues to find a way of touching the captain’s life, and that pattern holds true in this latest volume, matched with the other theme of the series: personal transformation. This applies not only to Harry, but also to this installment’s strong secondary hero, bootlegger-turned-sheriff Michael Gibson, whose narrative and relationship with nurse and midwife Molly Baldwin enliven the broader tale. As in earlier volumes, Durbin keeps the novel’s various plots bubbling at a steady pace, helped by the antagonism between Harry and one of the story’s array of morally conflicted figures, a man named Eldridge Payne. Payne elicits reactions from the protagonist that he’d like to think he’s outgrown. “As a preacher, he knew he should be concerned about Eldridge Payne’s soul,” Harry reflects at one point, “but what he wanted was retribution.” The author has a good ear for dialogue, a fine feel for pacing, and a knack for crafting characters—like Sarah, Harry, and Gibson—who are complex and intriguingly flawed but ultimately heroic. The action in this latest book is kicked off with the murder of a sheriff, a Confederate secret society called the Knights of the Golden Circle, and a secret room whose contents might change the captain’s life forever. Those coming to this volume cold will be confused about the finer details, but longtime readers of the series should be smiling at its conclusion.

An old-fashioned and uplifting tale starring a Civil War veteran.