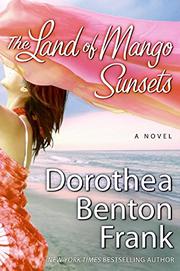 THE LAND OF MANGO SUNSETS

In Frank’s chatty latest (after Isle of Palms, 2003, etc.), a high-strung New York divorcée at loose ends changes her life for the better after getting in touch with her South Carolina roots.

Miriam Swanson has spent her entire life playing by the rules, and what has it got her? Husband Charles left to marry and raise children with his longtime mistress; Miriam barely speaks to her two grown sons. At least she has a lovely Manhattan townhouse, though she’s dismayed to learn that her new tenant, pretty southern transplant Liz, is sleeping with the husband of powerful society doyenne Agnes Willis, who’s been condescending to Miriam for years. Aching for a change, Miriam flies off for a weekend at the family beach house on Sullivan’s Island, lush location of many good memories. Her mother, the radiant Miss Josie, introduces her to an attractive retired banker named, of all things, Harrison Ford. Harrison dubs her “Mellie” and there is a palpable chemistry between the two, who are about the same age. But Miriam worries that he might actually be her mother’s boy toy, especially after she catches them smoking weed together. Back in New York, an ugly confrontation with nasty Mrs. Willis provokes Miriam to spill the beans about Mr. Willis’s affair. This has disastrous results for Liz, who is badly beaten by her creepy paramour. Guilt-ridden Miriam takes the battered girl to Sullivan’s Island to convalesce. Meanwhile, she takes steps to get closer to her sons. She even offers to plan the wedding of Charlie and his Jamaican longtime girlfriend Priscilla. All this leads up, perhaps too quickly, to reconciliations, romance and even a sad goodbye.

Scattered, but warming female-empowerment tale with a side order of southern magic.