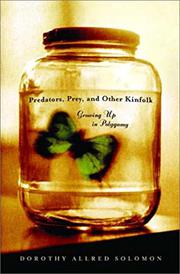 PREDATORS, PREY, AND OTHER KINFOLK

Growing Up in Polygamy

An unusual memoir from the daughter of Mormon fundamentalists who maintained the Principle of Plural Marriage long after the church officially abolished it.

“I am the only daughter of my father’s fourth plural wife, twenty-eighth of forty-eight children—a middle kid, you might say, with the middle kid’s propensity for identity crisis,” writes Solomon. Polygamy was illegal, of course; in 1945, four years before the author was born, her father stood trial and went to prison, where he served seven months of a five-year sentence. Throughout Solomon’s childhood, the family was forced to scatter to various states and across the border into Mexico. (Typically, a sympathetic police officer would alert them to an impending raid.) Solomon writes of great loneliness; when the family was separated, months would go by without a visit from her father. And while the author’s own full-siblings and mother survived, some of her half-siblings weren’t so fortunate. Without the guidance of a strong husband, one of the weaker “sister-wives” (there were eventually 16 in all) wasn’t able to prevent her son from sexually preying upon his sisters, and when one of the victims spoke out, she wasn’t believed. Major and minor transgressions had to be denied; the family did everything possible to avoid contact with the authorities. A strange car driving past the house was cause for terror. Solomon began questioning the fundamentalist doctrine as a teenager, eventually joining the mainstream Mormon church. She made a monogamous marriage to a Vietnam veteran, with whom she had four children. She turned to writing as a way to understand her past, couching her narratives as fiction in order to protect her family. Just as she made peace with her charismatic father, members of a rival fundamentalist group murdered him in 1977. The remainder deals with the family’s attempts to gain justice from authorities who felt that the murder was somehow retribution for the illegal act of polygamy.

Intriguing domestic particulars of a little-known way of life.