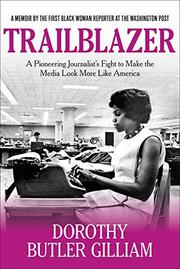 Affecting memoir by an African-American journalism pioneer focused on racial and gender equality.

Retired Washington Post reporter and columnist Gilliam (Paul Robeson: All American, 1976) looks back on her distinguished career, during which she helped spur diversity in the media, beginning in an era when such change seemed nearly impossible. “I saw myself,” she writes, “as one of the new-style, aggressive black Americans moving up in Washington and elsewhere [and] I immediately faced prejudice outside and inside the tension-filled newsroom.” Gilliam (b. 1936) was the first black woman journalist hired at the Post, and though some colleagues reached out, the author amply shows the surreal, hurtful quality of social segregation in the early 1960s. Before that, she experienced Jim Crow during a childhood in Memphis and Louisville; her father’s occupation as a pastor showed her both poverty and an aspiration for knowledge and success. In the book’s most powerful section, Gilliam narrates her experiences covering infamous civil rights flashpoints, including recollections of white supremacist mob violence: “As a Southerner, I knew Mississippi was a land of black death, but I went anyway.” After a hiatus, during which she raised children with the artist Sam Gilliam, she received an offer from Ben Bradlee to come back to the Post, which was then being questioned for its lack of diversity. “As a black person,” she writes, “I had been fighting racial discrimination in the media for more than a decade.” Gilliam remained at the Post until 2013 and then immersed herself in efforts to bring young people of color into the media. The author writes with an acute sense of the historical significance of her career and the changes she witnessed, and she forcefully demonstrates the continuing crisis regarding people of color in mainstream journalism. Only occasionally does the narrative become repetitive or tiresome, but on the whole, the pages turn easily.

An important document of the struggles (and triumphs) faced by African-American journalists from the 1960s until today.