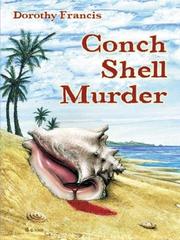 Junior high-school teacher Katie Hassworth, traumatized when prepubescent Jon McCartel opened fire in the classroom—killing a classmate and wounding her before turning the gun on himself—has decided to try a less hazardous profession. Now she and Jon’s dad have joined forces as McCartel and Hassworth, Private Investigators, whose caseload normally leans heavily toward drug-related cases, at least until perky Diana Dade, who rents Katie an apartment in the upper floor of her Key West mansion, begs the willowy blond sleuth to solve the murder of Diana’s mother, socialite Alexa Chitting, conked with a conch in her plush marina office. Since Alexa had been on the verge of writing a new will leaving her vast holdings to the Key West Preservation Group, there’s no dearth of suspects: Alexa’s husband Porter, her lover Tyler Parish, her secretary Mary Bethel, even Diana’s husband Randy all stand to lose a bundle once the new will is signed. And Katie interviews every last one of them, along with nasty Elizabeth Wright, who manages the Department of Community Affairs and pregnant Angie Garcia, Po Chitting’s Cuban lover. But the interview that gives Katie the most bang for her buck is with Key West’s mayor Rex Layton, who wines her and dines her and gives her all the goosebumps that ex-husband David (or, as he's known in Chapter 24, Chuck) couldn’t generate.

Even the hilarious solecisms (“she wouldn’t hear from Tyler Parish unless she instigated another call”) can’t lighten YA author Francis’s sodden first novel for putative adults.