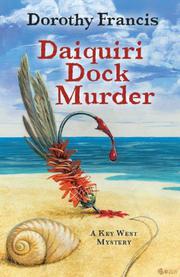 Rafa is checking the family boat during a storm when she discovers the body of her friend, dock master Diego Casterano, floating nearby. Being first on the scene puts her on the suspect list. So despite entreaties from her shrimper boyfriend Kane Riley, Rafa decides that she must investigate the murder. Her only clue is a piece of blue rope used to tie Diego to a cement block that resembles a piece she had seen on Riley’s shrimp boat. She can hardly picture Riley as a killer, but the coincidence does raise some niggling doubts in her mind. Diego, who had come to Key West from Cuba, has one son, a beach bum who occasionally plays drums at the hotel Rafa helps run with her mother and sister, both of whom are currently out of town. Of course there are other suspects beside Rafa and Pablo. Poet Dolly Jass was the last to see Diego alive. Dock owners Brick and Threnody Vexton had a disagreement with Diego over some plans to build a new hotel. And it turns out that Diego is only the first murder victim.

The Florida Keys are as lovingly portrayed as ever (Killer in Control, 2011, etc.), but the sparse mystery lacks cohesion.