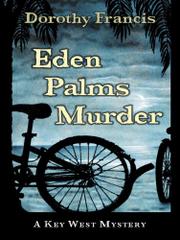 An invitation to spend some time in Key West turns a singer/songwriter into an amateur sleuth.

Bailey Green arrives in Key West just in time to discover that her old family friend Francine Shipton has been found murdered. Once Francine’s son Zack installs Bailey in residence in the guest cottage as his mother had planned, he presses Bailey to help him find her killer. He’s loathe to suspect his neighbors: realtor Courtney Lusk, who’d like to become Mrs. Zack Shipton; Dr. Gravely, who operates a private clinic in his home; and funeral director Tucker Tisdale. Zack’s more inclined to suspect the new yardman, Mitch Mitchell, who’s actually Bailey’s brother Chet, hidden in Key West by the Federal Witness Protection Program until he can testify against some drug dealers. Bailey herself is falling for Zack but feels obliged to consider him a suspect in his mother’s murder. There are, however, other possibilities as well. Because Francine was planning on turning her home into a refuge for the homeless, she was far from popular with her neighbors. As Bailey and Zack cruise the Keys looking for clues, their relationship is threatened by their mutual suspicions.

Loving descriptions of Key West are the best part of this forgettable whodunit from Francis (Cold-Case Killer, 2007, etc.).