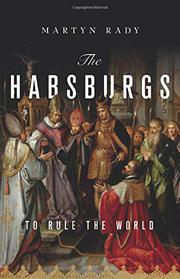 A sweeping chronicle of the rise and fall of the Habsburg dynasty.

In this ambitious overview, Rady, a professor of Central European history and author of The Habsburg Empire: A Very Short Introduction (2017), delivers a mostly chronological journey through the Habsburg dynasty from the 13th to the 20th centuries while contextualizing the times in which it flourished and, eventually, faded. Because the empire over which the Habsburgs reigned was enormous (“the Habsburgs were the first rulers whose power encompassed the world”), nonacademic readers may find it difficult to keep track of all the names and dates. Nevertheless, Rady valiantly attempts to give the principals some distinct accomplishments and traits: Maximilian (1459-1519), a self-promoter “who oversaw the composition of three allegorical autobiographies in which he depicted himself as the most chivalric and accomplished of knights,” brought Spain into the empire. Charles V, Maximilian’s grandson, attempted to outlaw Protestantism and eventually conceded that the Spanish Habsburgs would be split off from the Austrian Habsburgs and ruled respectively by his son Philip and brother Ferdinand while he retired to a monastery. Rudolph (1552-1612), a great art collector, employed Johannes Kepler as his astrologer, and Maria Theresa (1717-1780) instituted schooling for all children, frowned upon alchemy, and banned vampirism, which fascinated the media at the time: There were stories of “the undead feasting on the living, of exhumed bodies oozing with the blood of victims, and of stakings and beheadings.” Franz Joseph, whose nephew and heir would be assassinated in 1914, ruled for almost 70 years and created the Austro-Hungarian Empire. Though Rady is quick to acknowledge the Habsburgs’ missteps and weaknesses, he concludes that “their legacy survives…as a vision that combined power, destiny, and knowledge, and blended earthly and heavenly realms in a universal enterprise that touched every aspect of humanity’s temporal and spiritual experience.”

A comprehensive and, at times, lively chronicle, but not for casual readers with no prior knowledge of European history.

THE ENEMY AT THE GATE
by Andrew Wheatcroft
Newsletter sign-up