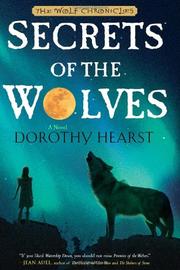 SECRETS OF THE WOLVES

Big wolves fight small wolves over the human threat to the natural world in an aficionados-only second serving of The Wolf Chronicles series.

Hearst (Promise of the Wolves, 2008) makes a muddy job of introducing new readers to the next episode in her proposed trilogy, with opening chapters clotted with references to earlier events and continuous infighting among wolf and other groups. Our heroine in this prehistoric landscape is the mixed-blood youngwolf Kaala—possibly the wolf of legend, destined to save or destroy wolfkind—who has won the right to spend a year trying to make the humans and wolves of Wide Valley learn to live peacefully together. First Kaala and her fellow wolves must win the humans’ trust, which they do with gifts of meat and joint hunts, aided by a girl whose life Kaala has saved and who can speak to the animals. But there are other plots afoot. The Greatwolves are driving most of the prey animals out of the valley in a strategy to create a war for food. Kaala, uncovering more Greatwolf secrets, tries to persuade her pack to follow her, but ends up alone, wounded, captured and braced for volume III.