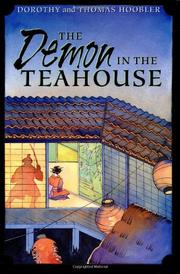 THE DEMON IN THE TEAHOUSE

The authors of Ghost in the Tokaido Inn (1999) return to the Japan of nearly 300 years ago for another whodunit solidly clad in accurate historical and cultural detail. Barely has young Seikei, newly adopted son of Edo’s chief magistrate Judge Ooka, begun his samurai training when he’s called upon to help the Judge investigate a rash of fires and murders. That investigation takes Seikei into Yoshiwara, the “Floating World” district of geishas and tea houses where, thanks to sharp eyes, careful questions, and a few well-timed revelations, he tracks down the culprit—though not before being tricked, framed, threatened with torture, drugged, and, in a rousing climax, nearly burned to death, while battling the deranged wife of a samurai who had killed himself for love of a geisha. The expertly unraveled mystery, as well as the vivid, exotic setting and fast-moving plot, will delight fans of Lensey Namioka’s historical thrillers. According to the afterword, Judge Ooka was a real, and renowned, detective. (Fiction. 11-13)