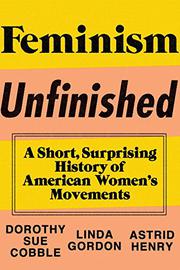 Hoping to “set the record straight” in challenging former perceptions of American women’s activism, Cobble (History and Labor Studies/Rutgers Univ.; Sex of Class: Women Transforming American Labor, 2007, etc.), Gordon (History and the Humanities/New York Univ.; Dorothea Lange: A Life Beyond Limits, 2009, etc.) and Henry (Women’s Studies/Grinnell Coll.; Not My Mother’s Sister: Generational Conflict and Third-Wave Feminism, 2004) condense a century’s worth of groundbreaking feminist lobbying into three densely packed sections. Cobble charts feminism’s early post-suffrage years from the 1920s to the 1960s, with a particular focus on the fiercely passionate social justice “gender pioneers” of the labor movement who fought for economic equality and civil rights. Gordon vibrantly chronicles the women’s liberation period through the “sex equality” decades of the 1960s to the 1980s, during which self-defined sexuality was championed alongside politically productive feminists’ organizations and sex-positive efforts. In the final section, Henry follows the movement’s progression through the millennial generation of women (and men) who employed the freedoms their predecessors fought so stridently for. Rebirthing the cause and continuing the good fight for gender equality, she writes, their efforts helped neutralize the stigma of LGBT visibility, “girlie feminism” and challenges to female reproductive rights in the 1990s. The authors’ comprehensive appreciation counters popular held myths by documenting the losses along with the progress, dispelling the imagery of the feminist as a “humorless, sexless reformer,” and, perhaps most profoundly, arguing against the belief that feminism is a marginal, minority-focused fight for equality when, to Cobble, Gordon, Henry and supporters nationwide, “it is a cause for everyone.” All three perspectives converge into a dramatic historical statement on the past and present condition of women’s rights and its power and omnipresence.