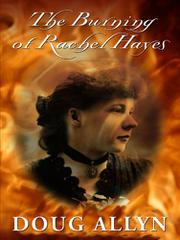 THE BURNING OF RACHEL HAYES

A small-town vet investigates a century-old crime while coping with his messy personal life.

Northern Michigan, 1871: Farm wife Rachel is caught in a late-night fire with Ginger, her terrified collie. Jump to the present, where David Westbrook is trying to build a veterinary practice after a broken marriage and a stint in jail. Answering the screams of camper Brenda Jozwiak, David rescues her son Bobby, who’s fallen down an old well. Inside the well he finds the tangled skeleton of Rachel holding Ginger. Local police, headed by Sheriff Wolinski, are immediately suspicious of David and begin to hassle him. After Carter Tipton, a prickly University of Michigan anthropologist, identifies the bones, he’s run off the road and killed. Wolinski finds this latest fatality a mere nuisance; only Dave and a local newspaper reporter named Meg are interested in investigating. The sheriff doesn’t change his opinion even when somebody tries to burn down Dave’s digs with the tenant inside. Dave’s adoption of a pack of dogs and bumpy love relationships for both Dave and Meg add texture to the tale.

Following his appearances in several of prolific Allyn’s short stories (All Creatures Dark and Dangerous, 1999, etc.), Dave’s debut novel is written with flair and abundant warmth.