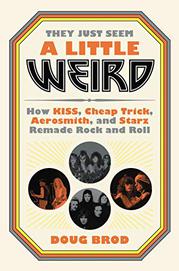 THEY JUST SEEM A LITTLE WEIRD

Starz, you may ask? That’s the point: The also-rans fit Brod’s theme that rock fame is sometimes arbitrary, usually absurd, and almost always fleeting. In the mid-’70s, all four acts were connected in terms of management, touring, and producers. KISS led the way both musically and theatrically; Aerosmith had a Stones-y (and for a long time druggy) vibe, and Cheap Trick merged anthemic rock with subtler, Beatles-esque songwriting. As for the glammy Starz, a band that had unlikely roots in one-hit wonders Looking Glass (“Brandy [You’re a Fine Girl]”), sharing management with KISS and stages with Aerosmith led at best to the nether regions of the sales and airplay charts and a role as tax write-off for KISS’ minders. When album-oriented radio stations emerged in the late-’70s, the band was “shut out of the broader airplay equation.” But even the bigger acts had Starz-like issues, struggling to stay relevant amid disco, hair metal, and grunge. Brod, former editor-in-chief of Spin, interviewed deeply, writes with a fan’s enthusiasm about all four bands, and braids their experiences to keep the book from reading like four separate bios. He’s also attuned to the Spinal Tap–ish nature of the acts, from backstage meltdowns to ironic calamities; Starz frontman Richie Ranno launched a successful business dealing KISS memorabilia until he was big-footed, yet again, by KISS. (Gene Simmons, infamously laser-focused on the bottom line, is a comically Mephistophelean figure throughout the book.) More information about the infrastructure of the music industry would better contextualize the story, and Brod delves further into the bands’ compromised late-period discographies than casual fans will care about. But their shifting fortunes are a reminder of their mix of talent and dumb luck: They all could have been Starz.