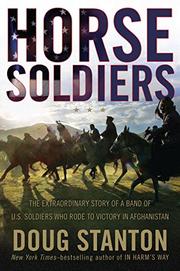 An action-packed, breathless account of American special-forces heroics that helped defeat the Taliban in the months after 9/11.

Stanton (In Harm’s Way: The Sinking of the USS Indianapolis and the Extraordinary Story of Its Survivors, 2001) apparently belongs to the history-is-boring school of writing, so he converts his material into a dime-novel narrative complete with strong-jawed American heroes, sneering villains, colorful natives and a relentless series of melodramatic cliff-hangers—an odd authorial choice, given that the plain facts are irresistible. Enraged at the Taliban’s refusal to hand over Osama bin Laden after 9/11, the United States resolved to invade Afghanistan. When military leaders realized it would take months to move soldiers to the distant, landlocked nation, they sent small numbers of elite Special Forces to support opposition fighters, guide precision air attacks and bribe local warlords to join. It worked brilliantly. Stanton recounts the lives of a dozen such soldiers and undercover CIA operatives, revealing their emotions and thoughts, quoting inner monologues and inventing dialogue to dramatize events. He invents similar scenarios for many Afghan figures and for John Walker Lindh, the American who fought for the Taliban. Using diplomatic skills, money, airdropped supplies and high-tech communications equipment, the soldiers inspired Afghan forces, who did almost all the fighting, to unite and crush the Taliban. In the final pages Stanton admits that America squandered this dazzling triumph. Happily proclaiming victory, the administration turned its attention elsewhere as Afghanistan descended into chaos from which the Taliban emerged again to control most of the country.