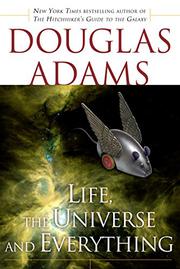 LIFE, THE UNIVERSE AND EVERYTHING

If The Hitchhiker's Guide to the Galaxy was a work of genuine lunacy, and its sequel The Restaurant at the End of the Universe less inspired and considerably more ragged, this is a much busier but practically mirthless offering: the whole notion palls, the dialogue is frequently reduced to the characters telling one another to "zark off," and even the chunks of furious hyperbole have an ominously serious ring. The plot, as far as can be determined, involves the reluctant activities of heroes Arthur Dent and Ford Prefect in preventing the pointless destruction of the universe by the deadly marauding white robots of planet Krikkit. (A long and involved old joke concerning the English game of cricket—practically meaningless to readers on this side of the Atlantic.) And there are some amusing spots, including: Wowbagger the Infinitely Prolonged, bored with being immortal, has decided to travel about insulting everybody in the universe—in alphabetical order; and the longest, most destructive party ever held, attended by the winner of the prestigious Rory award for Most Gratuitous Use of the Word "Belgium" in a Serious Screenplay. Overall, however: an effortful enterprise which at best achieves a sort of slow-witted camp pulp—and only for Adams addicts.