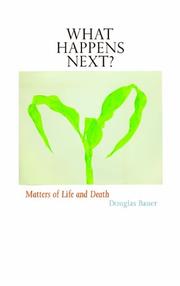 Matters of Life and Death

Bauer, a Boston-based writer and teacher (Literature/Bennington Coll.; Prairie City, Iowa: Three Seasons at Home, 2012, etc.), was once an Iowa farm boy. In these deeply personal essays, he celebrates his family’s life in the Hawkeye State.

Age-related ailments are the author’s evocative madeleine in his search for times past in the American heartland: Cataract surgery on the day his mother died results in a warm recollection of her life; an echocardiogram for tachycardia brings forth more rural family history; in his knee, a torn meniscus carries memories of the girls for whom young Bauer pined. The author remembers the kitchen aromas, the tractor growls, the working Iowa weekdays and the quiet Sundays in a genial, gentle manner. It’s as homely as checkers, modest as an outhouse, and, too, elegant and cleareyed. With his narrative artistry, Bauer renders the commonplace uncommon. He ably brings to life his forebear farmers and their diligent wives, the mean-tempered coal-miner grandfather in his bib overalls and his wife, and the corpulent grandmother. Bauer reimagines his parents’ youthful romance and paints, as well, their later, more fraught relationship. His mother always admired well-maintained farm tillage, and his father grew more taciturn as their bond became more caustic. After he died, her memory of married life became anodyne again. Early in his writing career, Bauer was befriended by the notable food critic and essayist M.F.K. Fisher, who, in important ways, seemed to become another maternal influence. And so the answer to the rhetorical question of this work’s title is clear. As the memoir reaffirms, we live and love, and the years pass, to be relived in memory of those who follow. It’s fortunate, then, to be memorialized in essays like these.

A literate, thoughtful memoir/essay collection from the heartland.