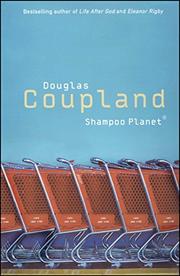 Still a cultural pulse-taker, Coupland (Generation X, 1991) organizes his hip bromides and next-wave sententiousness into a rather humdrum narrative that's long on posturing, short on plot. Laughing at disaster, Coupland's post-post-baby-boomers rationalize the culture of constant change, self-reinvention, and immediate gratification. Tyler Johnson, the 20-year-old narrator whose ""memories begin with Ronald Reagan,"" is an apocalyptic entrepreneur, a hotel-motel studies major who believes wholeheartedly in a boundless future, one he hopes to see as an employee for a northwestern conglomerate presided over by his personal hero, the CEO author of Life at the Top. A smart and glib media savant, Tyler speaks ""telethon-ese"" with his girlfriend and dubs his room at home the ""modernarium."" His mother, Jasmine, a hippie with armpit hair and a ""predilection for substance enthusiasts,"" represents everything that was wrong (in Tyler's view) about the Sixties. His grandparents, on the other hand, hoard their wealth and greedily pursue their pyramid sales scheme, marketing a cat food ""system."" Meanwhile, Tyler's summer fling in Paris comes to haunt him. The haughty and selfish Stephanie, one of the ""low-ambition Euro-teens"" he met on vacation, convinces him to move to L.A. with her in pursuit of fame and riches. Their adventures on the road include a visit to the commune where Tyler was born and a nightmarish stay at his father's drug farm. In L.A., Tyler works a fast-food ""McJob,"" while Stephanie secretly finds a sugar-daddy. Chastened by his low-life in la-la-land, Tyler returns home, rewarded with a dream job and a happier family. This TV/computer/video-savvy fiction is a frank celebration of life as a series of theme parks. Coupland's social commentary is, at its worst, fortune-cookie profound and, at best, a gloss on the Zeitgeist.