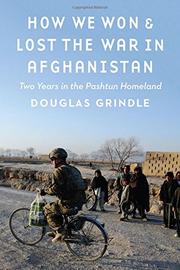 HOW WE WON AND LOST THE WAR IN AFGHANISTAN

Two Years in the Pashtun Homeland

The U.S. has spent more than $1 trillion on the war in Afghanistan, with more to come. Journalist and military analyst Grindle shows why that loss of treasure has amounted to so little.

It seems hard to believe, but a couple of centuries ago, British rule in the tribal areas beyond the pale of colonial dominance was effective enough that the names of two towns embody those of the foreign administrators. That has not occurred in the instances of the Russians and Americans who followed. “In Afghanistan,” writes the author, “the central truism of counterinsurgency is that you cannot kill your way to victory.” Absent killing, nation-building is in order, yet American efforts have been thwarted by political opposition at home and corruption in the field. The sole path to success, Grindle argues, is to build an Afghan government that is capable of shouldering its own burdens, one that can overcome a predatory and corrupt constabulary, broken infrastructure, and a dead economy, all of which make the prospect of Taliban rule attractive to a broad segment of Afghani society. It’s not for want of trying: as the author notes, American commanders on the ground have ventured programs such as direct aid to women’s development NGOs only to be so often frustrated by inefficiency and worse. “Budget funds seldom trickled down to the province,” he notes in the case of one development program, “let alone from the province to the district in the form of projects.” In the place of the projected troop surge, then—and Grindle notes that it costs more than $500,000 to keep a single American soldier in the field for a year—he argues that greater attention be given to what American policy has studiously avoided: “finally trying to empower the people at the lowest levels.”

Maddening, but helpful in pointing the way toward meaningful reforms in the conduct of American policy in the region.