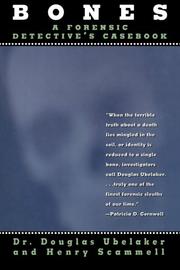 Bullet, stab, and hatchet wounds abound in this super-serious memoir/essay about police science--but Ubelaker (Curator of Anthropology/Smithsonian Institution) and Scammell (Mortal Remains, 1991) avoid sensationalism in discussing their gruesome subject, and give a close, often technical look at how skeletal remains aid in solving mysteries. Ubelaker seemingly has seen more human remains than any other living person. His bone bank at the Smithsonian consists of the remains of 30,000 people, all catalogued by physical characteristics, and is the one of the planet's largest gatherings of human bones. Police around the country, and the FBI, often call on Ubelaker for help in identifying remains and in determining the types of injury that may have contributed to a victim's death. The Smithsonian has built up a statistical data bank on bones that often can lead from a mere handful of recovered bone pieces to an amazingly on-target identification by age, sex, race, occupation, and the nature and time of death. Odd human remains, the authors tell us, frequently are found by beer drinkers beside the road, by hunters, and by dogs out looking for bones. In one case, we learn, a dog strolled into a backyard with a skull, complete with bullet hole, that led cops back to the rest of the skeleton of a murdered woman. The most common characteristic of Ubelaker's cases is that many of them begin out in the countryside. Chapter by chapter, the authors describe what happens to flesh and bone under all conditions of soil and season, whether burned, drowned, or buried, turned to soap or leather, or into a meal for dogs and maggots. A work of durable scholarship that could well become a resource for detectives and police scientists. The general reader in search of true-crime forensic suspense, though, will be better off with Christopher Joyce & Eric Stover's livelier Witnesses from the Grave (1990).