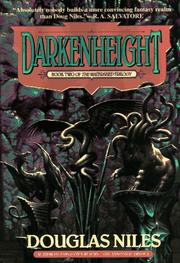 Vol. II of the Watershed Trilogy

Second volume of the Watershed trilogy (A Breach in the Watershed, 1995), set in a world divided by lofty mountains into three provinces: mundane Dalethica; Faerine, realm of the good- magic Aura; and Duloth-Trol, source of the evil-magic Darkblood. Duloth-Trol's ruler, the bad god Dassedec, continues his attempts to conquer the world. Once more he's opposed by mountaineer Rudy Appenfell, who has drunk water derived from all three provinces simultaneously and has become the Man of Three Waters, a magical warrior with the power to unite all those who oppose Dassedec. Again, bristly and energetic, and commendably self-contained, but with neither the craft nor the originality to stand out in a cluttered and overblown field.