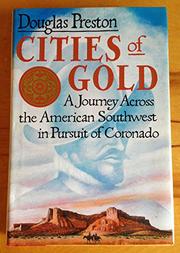 A Journey Across the American Southwest in Coronado's Footsteps

A torturous and sometimes comical attempt to trace Coronado's 450-year-old footsteps through the deserts and mountains of the American Southwest. Preston (Dinosaurs in the Attic, 1986) and an impoverished but free-spirited photographer-friend hire a wrangler (who actually knows less about horses than they do) and set off, even after they've been discouraged by those familiar with the country. Arguing over matters large and small as they go, the two men learn en route—about horses from cowboys they meet; about thirst from the death they court. Expecting to make 25 miles a day, they make four—or none, because they're searching for their horses, which ran off during the night. And all the time, they're aware that they're headed for the despoblado, the ``howling wilderness'' that almost killed Coronado and his men. Preston and his friend end up on precipices too narrow to dismount; they're almost washed away by torrential rains; they grow discouraged and consider giving up the journey. Preston dreams of walking into fine clothing stores and is despondent when he awakens in the arid wilderness. But the two persevere and discover the awesome grandeur of nature, as well as something about themselves. And when they come upon the first of what the Spanish thought were the Seven Cities of Gold, they understand that those early explorers had found something even better than gold—they found food. Throughout, Preston recounts the narratives of Coronado's expedition and other historical accounts, including those of the Indians of the Southwest. A Blue Highways on horseback, well worth the trip. (Maps.)