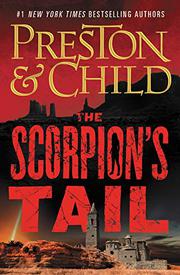 Past and present collide on a trail of death in the second in the authors’ Nora Kelly series, begun with Old Bones (2019).

When a local sheriff investigates the illegal activity of relic hunters in an abandoned, middle-of-nowhere New Mexico gold-mining town called High Lonesome, he discovers a mummified corpse and a fabulous cross of gold. The discovery is on federal land, so the FBI gets involved. Special Agent Corrie Swanson would have liked a juicier assignment than checking out some old bones in the high desert, but she has a degree in forensic anthropology, and she’s a rookie. She persuades a reluctant Dr. Nora Kelly, senior curator at the Santa Fe Archaeological Institute, to help puzzle out what happened to the man, as it’s unclear whether a crime has been committed. Forensics determine that the gold is slightly radioactive, and there’s a pack animal skull with a bullet hole. And by the looks of the decades-old corpse, the poor man suffered a horrible death. High Lonesome is on the Jornada del Muerto, or Dead Man’s Journey, the bleak and dismal trail that connected Mexico City and Santa Fe during Spanish colonial rule. The authors are expert plotters and storytellers with smart, engaging characters—Kelly is an experienced pro who thinks Swanson “looked very much the rookie.” Newbie Swanson had barely passed her firearms qualification, and being a lousy shot may bring tragic consequences and a guilty conscience. Luckily, Sheriff Watts has practiced his quick draw since he was a preschooler. Meanwhile, some of those relic hunters are dangerous men searching for an object—not the gold—unknown to Kelly and Swanson. To a descendant of the dead man, “most people would have thought his precious item fit only to line a henhouse with.” Expect nice twists, hairy danger, and good old-fashioned gunplay.

This one’s an attention grabber. Get a copy.