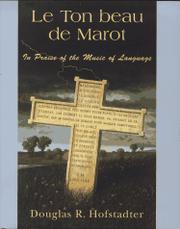 In Praise of the Music of Language

The author of the famous meta-mathematical treatise Gîdel, Escher, Bach investigates the formal qualities of language, translation, and literature in a friendly, sometimes brilliant, but generally pedantic series of meditations. Hofstadter's hymn to language overflows with chatty narration and personal anecdotes, all revolving around a tightly formed nucleus: his efforts ten years ago to translate into English a ``sweet, old, small, elegant'' love poem by the French Renaissance writer Clement Marot. Hofstadter tells how he came to understand translation in terms of various logical models for the transferability of patterns. He illustrates these models with a tremendous hodgepodge of case studies involving literary translations but also hexagonal chess games, off-color jokes, Chopin compositions, and problems that arose in translating Gîdel, Escher, Bach into other languages. Hofstadter draws particularly on insights framed in his own field, artifical intelligence, where the question of translatability raises larger philosophical questions of what it means to be human. Each chapter features a version of Marot's poem or other poems by Hofstadter or one of his friends illustrating points at issue. But despite Hofstadter's multifarious ingenuity, his central insights—e.g., the sublime complexity of language—seem banal. The complexities which Hofstadter explores will for the most part seem familiar, not just to philosophers of language and literary critics, but to thoughtful lay readers. Even the idea of love that Hofstadter offers (which posits that ``each human soul is a distributed entity that is, of course, concentrated most intensely in one particular brain but that is also present in a diluted or partial manner in many other brains''), while sincere, seems densely labored. While Hofstadter deserves praise for trying to rekindle the romance between science and literature, he might have succeeded better had he recalled their long-shared history, instead of feeling called on to engineer a blind date.