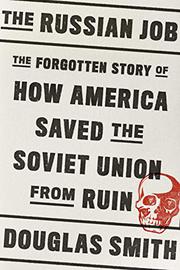 The hair-raising account of a great humanitarian act in which the United States provided vital assistance to the Soviet Union.

Historian and translator Smith (Rasputin: Faith, Power, and the Twilight of the Romanovs, 2016) reminds readers that World War I and civil war devastated Russian agriculture because the fighting armies lived off the land. By 1920, the Bolsheviks had largely won, but the government continued to forcibly extract grain from the peasants. Then the rains stopped. At first, Lenin “welcomed the famine, since he believed it would destroy the people’s faith in God and the tsar. Revolution, not charity, would save the peasants, he said.” By the summer, faced with mass starvation and violence, he changed his mind. Many philanthropists and international charities responded to pleas for help, but only one organization had the immense resources required: the American Relief Administration, led by Herbert Hoover, who had already impressed the world with his relief of mass starvation in Belgium and northern France during WWI and then again in Europe after the armistice. A successful businessman, Hoover employed the same talents to organize a vast enterprise led by loyal underlings who oversaw the distribution chain, from docks to warehouses to transportation to the soup kitchens. A few Soviet leaders were congenial, but most believed that the ARA was a nefarious capitalist plot. Secret police harassed the Americans and arrested Russian employees but sometimes, unpredictably, helped by cutting through red tape. Local officials were usually grateful. Infrastructure, housing, sanitation, and disease were terrible, far worse than in Europe. In an often agonizing but necessary book, the author includes letters and anecdotes by participants as well as often horrific photographs, all of which tell a grim story. Starving people do not overthrow governments, so it’s unlikely American aid saved the Soviet Union, but it was a magnificent achievement—and Smith adeptly navigates all elements of the story. Except for Hoover biographers, American scholars pay little attention to this episode; it quickly vanished from Russian history.

Although the catastrophic Russian famine and American relief efforts are not completely forgotten, this expert account deserves a large readership.