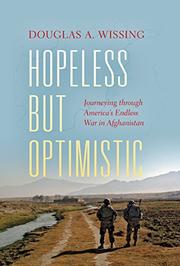 by Douglas A. Wissing

A scathing dispatch from an embedded journalist in Afghanistan.

Demoralization, staggering waste, and corruption: this is the norm in Afghanistan as U.S. troops move into full retrograde (meaning retreat) and other foreign entities like NATO jump ship out of a keen sense of their own futile mission. In this episodic chronicle spanning some months in 2013, when he embedded a third time with U.S. troops there, journalist Wissing (IN Writing: Uncovering the Unexpected Hoosier State, 2016, etc.) describes how the counterinsurgency was almost too painful to talk about among an occupying army that saw its efficacy draining by the minute. From the trillions of U.S. dollars spent in Afghanistan winning the hearts and minds, the author rightly wonders about what has been gained. Journeying from the capital’s “Kabubble,” a sleek, ersatz boomtown, to the many half-finished construction projects (“megalomaniac wet dreams”) begun with the fuel of dollars in the days of post-invasion to the numerous hermetically sealed, security-tight army bases set in the middle of dusty, mountainous desert terrain of the southern provinces neighboring Pakistan, the big question remains: what are the Afghans going to do when the Americans leave? Due to the author’s previous critical writing about America’s “endless war” in Afghanistan, Wissing was barely tolerated by military officials, and he was even kept away from speaking with the fresh Marines, who were still excited about the prospect of reconciling their sense of duty there. However, as the U.S. government decreased the number of troops, the highly paid contractors increased, and no one knew the official count. In his short, punchy, poignant chapters, the author looks at the on-the-ground conditions for the hapless soldiers in terms of food, elimination, sex, PTSD, and the treatment of brain injury, among other topics. He concludes, as have many veterans there working for agricultural development and other aid projects, that in the end, “the Afghan way is the best way.”