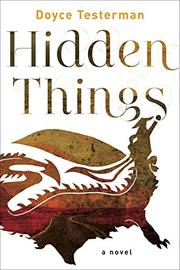 In California, Calliope Jenkins of White Investigations receives a phone call from her partner, Josh White, who’s pursuing a case in Iowa, although he’s explained nothing of what the case involves. The following day, Detective Darryl Johnson and Special Agent Walker show up at her office with the news that Josh has been murdered. However, on the answering machine is another message from Josh, mysteriously warning Calliope to watch out for the “hidden things” and, according to the time stamp, left several hours after Josh was killed. There’s no question that Josh is dead. Walker doesn’t believe that Calliope knows nothing and insists on raiding the files. Outside, Calliope notices she’s being followed by a homeless bum wearing a hoodie and clown makeup; being a martial arts expert, albeit with anger management issues, she clobbers the unfortunate creature and thinks nothing more of it. However, Vikous proves tougher than he looks, and very persistent. Finally he persuades Calliope to listen: He is, in fact, one of the “hidden things,” a bogeyman, and the clown makeup isn’t makeup, it’s his real face. Clearly a road trip to Iowa is in order, where Calliope grew up and her estranged family still lives. But Vikous isn’t the only supernatural operator in the game, and the opposition proves treacherous, powerful and cunning, with motives that Calliope won’t understand until much later. Along with the clever, determined, dauntless protagonist, Testerman brings an impressive dark energy to the scenario and plotting, even though, despite the profanities and sexual situations, the characters dwell rather YA-ishly long on working through prior issues and hang-ups.

Agreeably creepy, with original flourishes and flashes of dark humor.