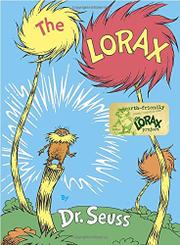 The greening of Dr. Seuss, in an ecology fable with an obvious message but a savingly silly style. In the desolate land of the Lifted Lorax, an aged creature called the Once-ler tells a young visitor how he arrived long ago in the then glorious country and began manufacturing anomalous objects called Thneeds from "the bright-colored tufts of the Truffula Trees." Despite protests from the Lorax, a native "who speaks for the trees," he continues to chop down Truffulas until he drives away the Brown Bar-ba-loots who had fed on the Tuffula fruit, the Swomee-Swans who can't sing a note for the smogulous smoke, and the Humming-Fish who had hummed in the pond now glumped up with Gluppity-Glupp. As for the Once-let, "1 went right on biggering, selling more Thneeds./ And I biggered my money, which everyone needs" — until the last Truffula falls. But one seed is left, and the Once-let hands it to his listener, with a message from the Lorax: "UNLESS someone like you/ cares a whole awful lot,/ nothing is going to get better./ It's not." The spontaneous madness of the old Dr. Seuss is absent here, but so is the boredom he often induced (in parents, anyway) with one ridiculous invention after another. And if the Once-let doesn't match the Grinch for sheer irresistible cussedness, he is stealing a lot more than Christmas and his story just might induce a generation of six-year-olds to care a whole lot.