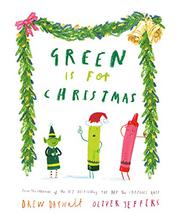 GREEN IS FOR CHRISTMAS

Familiar crayon characters argue over which color is the essential Christmas color.

Green starts by saying that green is for Christmas. After all, green is for holly. But Red objects. Red is for candy canes. Green is for fir trees, Green retorts. But Red is for Santa Claus, who agrees. (Santa is depicted as a white-bearded White man.) Then White joins the fray. After spending the year being invisible, White isn’t giving up the distinction of association with Christmas. Snow, anyone? But then there’s Silver: stars and bells. And Brown: cookies and reindeer! At this point, everyone is confused. But they come together and agree that Christmas wouldn’t be Christmas without all of them together. Someone may get the last word, though. In Daywalt and Jeffers’ now-signature style, the crayon-written text is spare and humorous, while the crayon characters engage with each other against a bare white background, vying for attention. Dot-eyed faces and stick legs on each object turn them all into comical, if similar, personalities. But the series’ original cleverness is absent here, leaving readers with a perfunctory recitation of attributes. Fans of the crayon books may delight in another themed installment; those who aren’t already fans will likely find it lacking. (This book was reviewed digitally.)

Fun enough to read once but without enough substance to last.