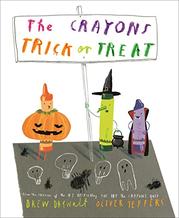 THE CRAYONS TRICK OR TREAT

The Crayons return in time for Halloween as vampire-costumed Purple coaches the dressed-up wax pack through its first trick-or-treating venture.

It takes five houses’ worth of door-knocks for this skeleton crew of seven to perfect the protocol, with enough outlandish flubs to generate giggles in Halloween-savvy preschoolers. At Door No. 1, Orange, dressed as a jack-o’-lantern, says, “Give us your candy, Lady.” At the next, the gang, encouraged by Purple to “think holiday,” responds with an impressive array of misguided greetings, including “Merry Christmas!” and “Happy American Cheese Month!” Later, White, levitating impressively in a ghost costume, overreacts to Halloween’s “scary” aspect by overwhelming residents with a “BOO!” Peach, unnamed here but recognizably wrapperless from the initial title, exuberantly (and inappropriately) repeats, “I’m naked!” Finally, the troupe perfects its treat-inducing line, though a certain ghost cannot resist an ad lib. This excursion, like many of the holiday-themed Crayon books, has a smaller trim size, a lower price point, and far less complexity than Daywalt and Jeffers’ first two Crayon titles. Still, the pair deftly let young children in on the jokes through funny, hand-lettered dialogue and the visually telegraphed, all-in haplessness of this well-branded band. (This book was reviewed digitally.)