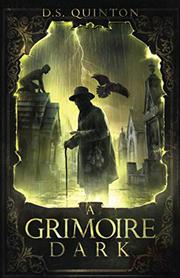 A young woman must face her destiny in Quinton’s (The Phoenix Stone: A Dark Beginning, 2019, etc.) horror novel set in 1963 New Orleans.

Teenage Delphine “Del” Larouche was practically raised in an orphanage, but now she’s old enough to strike out on her own. Eager to live a life on her own terms, she finds herself a job and begins to plan her future. But when strange killings with ritual elements that defy logical reasoning start causing widespread fear, Del latches onto the case with intense fascination. What she doesn’t realize is that evil forces of nightmarish proportions are gathering strength. When she makes a startling discovery about her own past, she must make an agonizing decision: give up the life she’s dreamed of—or embrace her fate and an uncertain future. The Big Easy setting is a perfect background for a paranormal novel, and the author does a great job of emphasizing the city’s distinctive features to increase tension; cemeteries, swamps, and dimly lit streets all serve to enhance the plot. Some of the dialogue, however, may cause readers to struggle. In an effort to make the characters sound realistic, the author emphasizes their Louisiana accents, but at times it's distracting and hard to read, as when a local police captain calls private investigator Frank Morgan and asks, “Frang, leesen, I was wond’ren could you run a call fer me?” That said, the idea of a showdown with evil spirits in New Orleans will likely be enough to keep readers interested, and there are plenty of intriguing side characters who add layers of complexity to the story. Witnessing Del’s transformation from timid young woman to confident investigator is immensely satisfying, particularly in the book’s second half. The author also makes his admiration for Edgar Allan Poe apparent with several melancholy poems between chapters—a nice touch for fans of classic literary horror.

A dark, imaginative, and enchanting tale of spirits and unlikely heroes.