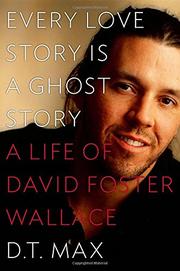 EVERY LOVE STORY IS A GHOST STORY

A Life of David Foster Wallace

A thorough, understated account of the life of the pioneering author and how his addictions and fiction intersected.

Before his suicide, David Foster Wallace (1962–2008) pursued a host of paths as a writer. He was a showy ironist who drafted his Pynchon-esque debut novel, The Broom of the System (1987), while an undergraduate student at Amherst. He was a bright philosopher who wrote at length on Wittgenstein and infinity. He was a skilled (if not always factually rigorous) reporter who covered state fairs, politics and tennis with intelligence and style. But the biggest inspiration for his admirers was the compassion, wit and understanding of our media-soaked age that emerged in later novels like Infinite Jest (1996) and the posthumous The Pale King (2011). In this appropriately contemplative biography, New Yorker staff writer Max (The Family that Couldn't Sleep: A Medical Mystery, 2006) avoids overdramatizing climactic events in Wallace’s life, though it had plenty of emotional turmoil. Wallace was hospitalized for addiction and depression multiple times, and even at his steadiest he could collapse into rages. (Max chronicles in detail Wallace’s disastrous relationship with memoirist Mary Karr.) Max emphasizes the psychological tug of war within Wallace, who struggled to reconcile his suspicion of mass media with a habitual gulping down of hours of it; his high-minded pursuit of art with a need for emotional and sexual attention; and his resolve to blend entertaining fiction and dense philosophy. Max draws upon the rich trove of Wallace’s papers (he was an inveterate letter writer) and dozens of interviews, from Alcoholics Anonymous sponsors to literary contemporaries like Jonathan Franzen. Wallace’s family relationships get relatively short shrift, but it’s clear that under the veneer of a successful, brainy novelist was an eager-to-please native Midwesterner.